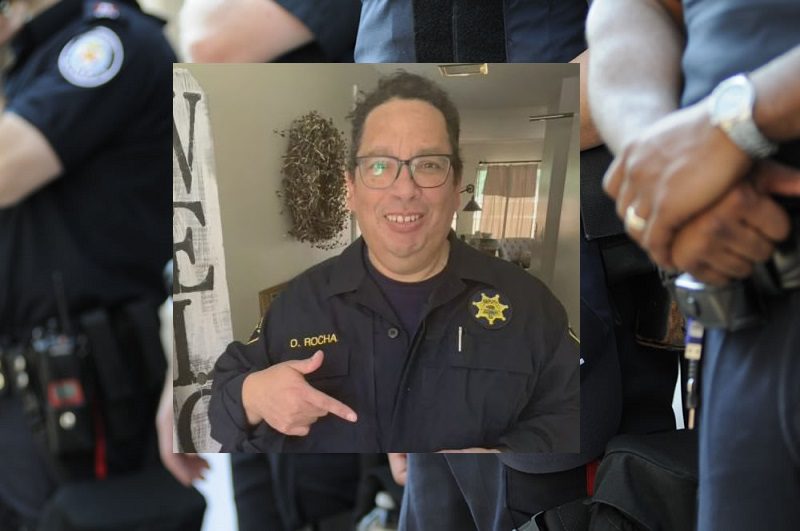 Deputy Sheriff Oscar Rocha, 57, died after a courageous battle, on July 23, at 6:45 pm from complications due to COVID-19. Deputy Rocha is the first Deputy in the Alameda County Sheriff’s Office to have died in the line of duty from COVID-19. It is believed he contracted the contagious virus at the Santa Rita Jail in Dublin during an outbreak in June, per Sgt. Ray Kelly. Rocha, a senior member of the department, was employed for 25 years, mostly at the Rene C. Davidson Courthouse in Oakland as a bailiff, sometimes at the security entrances to the courthouse. Deputy Rocha is survived by his wife Maureen Ennor Rocha; his son Alexander Rocha, of Mississippi; stepchildren Haley and Patrick Urbanus; his parents Oscar and Rosario Rocha, of Oakley; three sisters.

Rocha came down with COVID-19 about a month ago and was admitted to the John Muir Medical Center, where he remained in critical condition for more than three weeks. Each day was a battle for him as he lay in the hospital bed, intubated to a ventilator, fighting for his life. His wife also contracted the virus but was very lucky, as she recovered after only two in the hospital.

Santa Rita Jail has been hit hard by COVID-19, with 104 inmates infected as of Friday. A total of 48 jail staff employees and contractors, including deputies, have contracted the diseases; a dozen currently have it. An inmate from the Santa Rita Jail who was positive for COVID-19 sometimes worked in the unit’s kitchen. Gilbert Martinez, the inmate, was just one in forty of the inmates who tested positive in one week. Deputy Rocha was assigned to the kitchen unit on occasion. During this ongoing novel coronavirus outbreak, the sheriff’s department has seen at least 40 deputies, and more than 100 inmates at Santa Rita test positive.

A Love Story and Lover of Sports

Rocha grew up in San Ramon and most recently lived in Danville with his wife. The two had known each other since they were 14 and attended California High School together in San Ramon. They reconnected nine years ago through Facebook, nearly 30 years later. Maureen Ennor said, “I never knew he had a crush on me. That’s Oscar for you. He took his time with everything.” Being a huge San Francisco Giants and 49ers fan, Rocha did what was natural and proposed to Maureen the only way he could – on the Jumbotron, in front of 46,000 people. Maureen said, “It was adorable. I was shocked. I had never been so surprised in my whole life.” On New Year’s Day 2014, the couple was married in Hawaii during a vacation. Rocha loved sports so much that he named his English Bulldog “Bochy” after former SF Giants manager, Bruce Bochy. Still holding season tickets to the 49ers, Maureen sadly said, “The worst part was when he died yesterday, I was thinking, his life is just gone. All the things he loved and did, gone.”

Deputy Rocha was friendly, dependable, patient, unshakable, good-natured, easy-going, helpful, and served as a model to others. These are just some of the adjectives people used to describe Rocha. He was seen as nothing but a great individual and respected by all. His loss had an impact on many people in the Tri-County area.

Sgt. Kelly, a friend of Deputy Rocha’s, commented about his friend and their shared grief. “Our hearts are heavy today. But we’re glad Oscar isn’t suffering, and he’s at peace and a cigar and scotch aficionado. He’s just a reliable person, dependable. He never complained or called in sick or made excuses. He was loyal.”

Sgt. Kelly also commented on the virus and the mixed beliefs of community residents. “Oscar’s passing is a reminder to everyone, no matter who you are, that this virus is no joke.”

“He was never rattled,” Rocha’s wife, Maureen, said. “That’s why he was so successful. He was able to handle anything, and he never lost patience.”

Deputy Public Defender Jeff Chorney stated, “He always treated my clients and me with respect. Things can get tense in court, but he stayed mellow. I’m sorry this happened to him, and I’m sorry for his family and colleagues.”

“Deputy Rocha appearing to work in our courtroom was always a welcome sight,” Superior Court Judge Andrew Steckler commented on how Rocha made everyone feel at his job.

In a Tweet from Representative Eric Swalwell, “I am saddened to learn of the passing of ACSOSheriffs Deputy Oscar Rocha to #Covid_19. May his memory always be a blessing.”

Alameda County Sheriff’s Deputy Oscar Rocha loved his job so much that when he died Thursday night from COVID-19 complications, he had his badge in his hand. At the same time, the roar of a motorcycle honor guard outside his hospital room could be heard. When his wife told him they had arrived, Deputy Oscar Rocha passed away.

Deputy Oscar Rocha was a devout Catholic; Chaplain Jayson Landeza went to the hospital to perform Rocha’s last rites. Deputy Rocha passed away peacefully with his badge and rosary beads in his hands.

“They were ready to take him home,” Maureen Ennor Rocha said of fellow officers who came to show respect to the lost officer. Motorcycle officers from the California Highway Patrol, Contra Costa County Sheriff’s Office, and the Walnut Creek and Concord police departments came to the John Muir Health center to escort Deputy Rocha to the coroner’s bureau. Dozens of officers formed an honor guard saluting their colleague as deputies took his body inside.

Seeing the outpouring of support, Ennor Rocha commented on how healing that was for her. “That healed such a big part of my heart last night.”