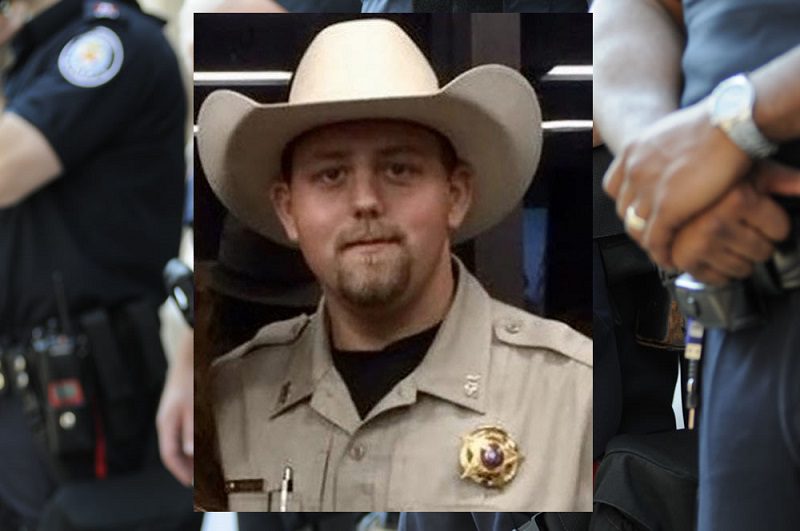 Early in the morning, around 2:00 am, Deputy Sheriff Chris Dickerson made his last traffic stop. It was the last day of the year, December 31, 2019. It was a routine traffic stop. Then the unexpected. The driver pulled out a semi-automatic rifle and shot and killed Deputy Dickerson.

He was shot several times and the wounds were severe. The driver fled. The gunshots were heard by several neighbors who came running to help the deputy, they found Deputy Dickerson clinging to life lying in the road. He was transported to the local hospital, but later died from the injuries. He was 28 years old. He left behind a family, his wife, children, and many others.

The driver made it to Shreveport, Louisiana, where another team of officers located him after he was involved in a vehicle crash. They were able to apprehend him, through the help of their K9 officers who hunted him down. He is now facing extradition for capital murder charges as well as many other charges.

Police work is one of the most dangerous career paths that one can choose. Deputy Sheriff Chris “Tricky” Dickerson sought out this career early in his life. It was what he had always wanted to do. He gained many skills and training while serving in the U.S. Army and the move to police work was a natural fit. He enjoyed service to his country and to his community.

The dangers involved in police work can be many. There is more to doing police work, than simply pulling over cars to hand out tickets or slapping on a pair of handcuffs. Some of the regular duties of an officer include responding to emergencies, preventing crime, handling accidents and violent situations. Police are the first line of defense for maintaining public safety and are often called to help communities through emergencies, like natural disasters and floods.

Gun violence is one of the many situations that officers face each day in the line of duty. Police get up and go out, knowing that every day there is a chance that they may not make it home to their families. Their hearts are filled with a love for their communities that the danger is put aside in their minds as they step out the door and put everyone else, even strangers first, before their own lives. In Deputy Dickerson’s situation, he was doing what he loved, his job of protecting the community, and a senseless act of violence took an honorable man’s life, and devastated a family, a community, and a department.

Deputy “Tricky” Dickerson loved Carthage, Texas and he loved football. As a young man he played on the high school’s football team, the Carthage Bulldogs, helping to bring the team to state championships. He continued to instill that love into his children, teaching them about giving back and the love for the game of sports as he coached his daughter’s softball team.

According to a friend, Clinton, he described Dickerson as one who could always be depended on. Someone who was also respected and loved by his coworkers. Clinton went on to state that Dickerson was clearly a man of love and duty. He gave so much to the town of Carthage, Texas, the community he loved and where he chose to raise his young family. Even though he was a full-time deputy, he continued to his active service to the community by serving as a local firefighter. He didn’t end it there, he also worked for the police dispatch at the Carthage Police Department, volunteered for the American Red Cross and was a mentor to kids in the community.

The Panola County Sheriff’s office has a historic past that is part of the American story. The county was founded in 1846 and was named for the Choctaw/Chickasaw word for cotton. Prior to the ‘official’ founding of the county in the Texas legislation, Sheriff Alfred George was the law enforcement in the Panola area in 1840. During that time cattle rustling was rampant. Many things were about to change in Texas as the U.S. President, Martin Van Buren opposed the annexation of the state.

Upon request of a neighboring sheriff in Louisiana, Sheriff Alfred George was looking for a Joseph Goodbread, for possible crimes. He enlisted Charles Jackson to help with locating him. History tells us that Jackson murdered Goodbread. The Sheriff then arrested Goodbread, but released him until his trial, as the jail was not fit to hold prisoners.

This was the beginning of a large part of both American and Texas history. As the Sheriff then formed and enlisted a group of men to help him rid the area of cattle rustlers. They called themselves the Regulators. Another man, Edward Merchant, formed an opposing group called the Moderators. This began the East Texas Regulator-Moderator War. The war went on for several years, causing great fear in the citizens of the area.

Deputy Sheriff Chris “Tricky” Dickerson may have enjoyed serving for an office that came through such a historical moment in history. As his friend Clinton explained, he was the kind of man that gave everyone in the community a reason to believe that we live in a great country and are afforded many opportunities and can look forward to living safe and prosperous lives.

Hundreds of people came to show their respects to Deputy Dickerson at his funeral. Sheriff Kevin Lake took the stage and quoted Psalms 118:24. “This is the day that the Lord has made, we will rejoice and be glad in it.” Sheriff Lake held Deputy Dickerson in high regard and talked about the meaning of the badge. He began by using Dickerson’s favorite phrase, “So, here’s the deal.”

Sheriff Lake explained that Dickerson held reverence for his badge. He gave the mourners some background on the history of the Sheriff’s badge and the meaning behind it. He explained that officers do not receive the badge until all training, tests, and requirements are fully passed. It is a great achievement. He went on to explain to everyone there is an important message that Deputy Dickerson would want them to take to heart. He stated, “First of all, to have faith in God, your fellow officers, your training, your education, your experience, your family: All exhibiting the badge that’s pinned upon your chest. Chris valiantly displayed this in course of his duties each and every day.”

May the community find solace in these words and continue to honor the example he gave them in life.