In Memory of Corporal Andrew Gillette 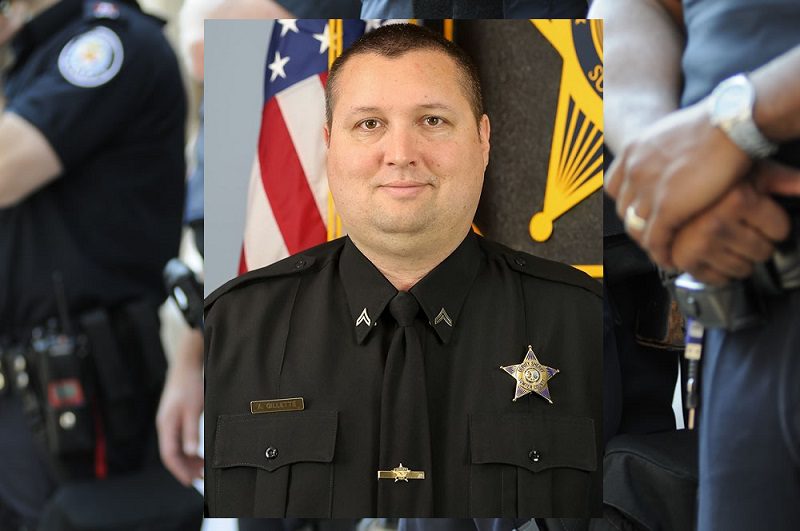 Corporal Andrew Gillette arrived at 3120 Thomas Sumter Highway around 11:30 am on Tuesday, February 25, 2020. He was there with several other deputies to serve both a detention order and an eviction order on the current resident. While deputies were approaching the home, the suspect began firing a weapon, killing Corporal Gillette at the scene.

The other officers returned fire. The suspect was shot and killed, a senseless act of violence which left two men without their lives. The suspect that was on the court orders was the person involved in the incident.

Corporal Andrew Gillette was a man of honor. He had given his life in service, both to his country and to his local community. He began his law enforcement training while in the military. Corporal Gillette is an Air Force Veteran. He had spent the last seven years working locally with the Sumter County Sheriff’s Department in Sumter, South Carolina. Sumter, South Carolina is the home community that Corporal Gillette gave his life to serve and protect.

Mike Scimeca, discussed his observations from experience as a long-term process server for McHenry County, Illinois. It includes parts of the outskirts of the Chicago area. Scimeca, designated to the northwest portion of the county, stated that of the four process servers in McHenry County, his territory was likely the most dangerous. The area he served was heavily populated and had many challenges specific to the area. It has the highest gang members, the poorest population, and a majority who speak only Spanish.

He explained that because they wear uniforms and drive squad cars that look nearly identical to that of the local police departments, their jobs can actually be more dangerous. He said what makes their job more dangerous than that of their brothers and sisters in regular law enforcement positions is that on a typical day, a process server makes more direct contact with individuals than a normal law enforcement officer makes in a three to four-day period. Along with the higher rates of contact, process servers are always knocking on doors without any knowledge or background about who could be on the other side. They walk into most situations blindly and while there are expected to deliver news that is generally devastating to the recipient. Mr. Scimeca states that along with his uniform and the many documents that he delivers each day, which averages close to 900 daily, he always carries his .45 caliber pistol.

Corporal Andrew Gillette had served for the past seven years with the Sumter County Sheriff’s Department. Corporal Gillette had the opportunity to enjoy working for a department with a long history, one that began with Sheriff John Manning Tindall in 1872. Throughout the years the department’s focus has been on helping the community and keeping its citizens safe.

More than that, the officers in this department truly belong as neighbors, friends, and caregivers to the citizens in their charge. The officers have found a variety of ways to give back to the county and build solid relationships with local organizations and neighborhoods. They spend as much time as possible outside of their duties, with their neighbors, friends, churches, schools, and other community groups in an awareness that they belong to them and for them.

Their department has chosen to foster relationships and to do volunteer service in a variety of ways. Some of the officers do volunteer work to coach kids in sports, such as little league or basketball. Several officers with talent, have formed their own choir, which performs at many of the local churches and other neighborhood functions in a way to get to know personally the people they protect.

They come together for Sumter County in so many ways that their department should be commended. Corporal Gillette loved his career as an officer and this department gave him the opportunity to do more than just enforce the law. This type of position gives pride over the community and work being done to help others. Officers would come together to help people with community enhancement projects, build ramps for homes, doing all they can to go above and beyond their duties.

The youth in the community was also a priority, as the department has very special programs that deputies can become involved with to help local youth learn values and become good citizens. They have a Boys to Men as well as a Girls to Women group to teach leadership to youth. They also teach moral responsibility and positive life decision making to youth ages 14 to 19 who are interested in a possible future career in law enforcement in their Police Explorer program. The Sumter County Sheriff’s Department was one in which Corporal Andrew Gillette was proud to be a part of.

A Son Without a Father

Beyond the pride in his work, Corporal Andrew Gillette had a loving family which he has left behind. His wife and 11-year-old son, as well as other family, friends, neighbors and co-workers are mourning this tragic loss. Corporal Gillette was a giving, honorable man, who worked hard to be an example to his family and neighbors through his life’s work.

The Sheriff, Anthony Dennis, spoke of the honorable way that Corporal Gillette served during his time with the department. He stated that Gillette loved the department and his work for the community. He was 37 years of age. Sheriff Dennis went on to describe the situation as “losing a family member,” as the entire department is extremely close-knit. The family is comforted in knowing that Corporal Gillette, coming from a family with many law enforcement officers, died doing what he truly loved doing. Corporal Gillette was a man of faith who loved life, and gave his life to the community he loved to protect.

Sheriff Dennis stated that there is a fundraiser for the family members under Corporal Andrew Gillette’s name and 100% of the proceeds will go to his wife and child. They want to continue to provide assistance to the family and hope that the community keeps his family and the department in their prayers.