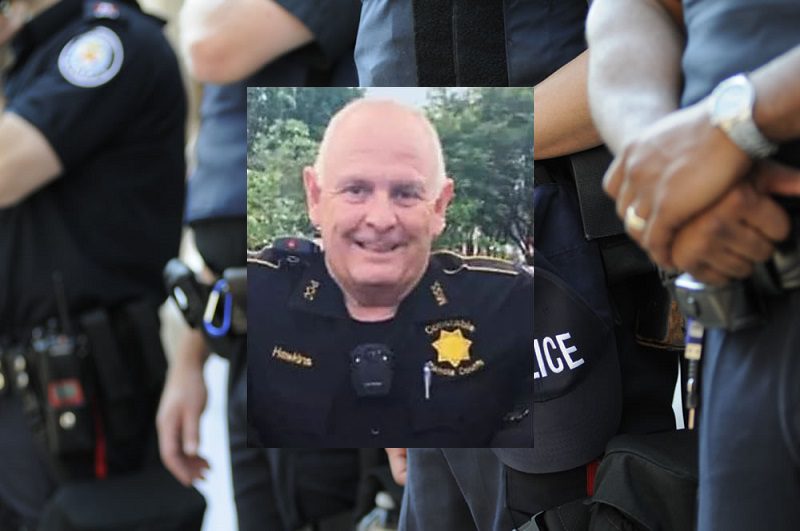 Mississippi Constable Eula Ray Hawkins, age 57, heard the call over his police radio regarding a chase in progress. He was the kind of officer that was always ready to give some assistance to local law enforcement and realized he was nearby the scene. He did what he always did when the call came out, he went to see if he could give them a hand in any way.

It was around 2:30pm on December 12, 2019, when Constable Hawkins was approaching the area of where the chase was occurring when the vehicle involved in the pursuit slammed into his car at a high rate of speed. The chase had begun in Tallahatchie County when two deputies attempted to pull over a stolen vehicle in which there were two juvenile offenders. The accident occurred at the intersections of Route 35 and Route 6. Constable Hawkins did not survive. District Attorney John Champion told local news that the impact was severe and left the Constable’s car crushed and mangled from the impact and it killed him instantly.

Batesville Police Chief John McCloud described a heart-wrenching scene when one of his officers was first on the scene. The officer that was first to arrive was Constable Hawkins’ own son. It was a horrible tragedy that he had to discover his own father was involved in the scene.

Surprisingly, there are 25 states in the United States that still have the position of Constable within their judicial or law enforcement structure. In some states these are elected positions. Most have the full arrest powers of a police officer with just cause, but generally only assist other officers or their duties are confined to delivering subpoenas or other court documents.

In Mississippi, Constables are elected law enforcement officers. Their duties are generally to assist other agencies, deliver subpoenas or court documents and keep the peace within their county. When keeping the peace, they advise the courts, judges, and other law enforcement agencies on riots, routs, unlawful assemblies, and other violations of penal laws.

Constable Eula Ray Hawkins was elected to his position of Constable for Panola County, Mississippi. He had many years of experience in law enforcement. Prior to his elected position, Constable Hawkins was a Batesville, MS Police Officer, where his son currently works as an officer.

Constable Hawkins spent 29 years of his life serving the community in law enforcement. Most of that time he was a member of the Batesville Police Department. He was extremely proud as a father when his son followed his path and also joined the department as a police officer.

The department serves the city of Batesville, Mississippi, which is home to approximately 8000 residents. Their blue family consisted of 44 sworn officers and 10 civilian employees who all worked together to provide safety and security to the entire community. Their department has a unique focus on the youth of the community and works hard to be a positive influence on them. Quite pointedly, they state quite emphatically that, “We have to plant some trees in order to someday have some shade, so… if we can be the soil to the planted acorn… the seed of our youth… then hopefully, they will become the mighty oaks of leadership in our community and inspiration to the youth of the future.” This makes it so much more difficult that it was juvenile offenders from a neighboring community that took the life of one of their own family.

According to the U.S. Department of Justice, Office of Juvenile Justice and Delinquency Prevention, the rates of deaths from crimes involving juvenile crime where arrests are for murder or nonnegligent manslaughter has come down in the last twenty years. Surprisingly, it reached an all-time high in 1993 when there were approximately 12.8 juvenile murder/manslaughter arrests for every 100,000 youth ages 10 to 17. Today, that number has dropped to approximately 2.7 arrests per 100,000 youth.

The senseless nature of this crime is leaving many families to grieve. The juveniles involved not only took the life of Constable Hawkins, but they have created an impact on the entire community because of their pointless behavior choices. Both juveniles involved were arrested and charged as adults for felony murder. They leave behind their mothers, fathers, and siblings to grieve for their loss as they realize they will face many years, if not life, in prison. Their families are in great sorrow for what they have done.

For Constable Hawkins’ family, they are mourning the loss of their dear loved one, father, friend, mentor and leader. He made an impact on the entire community during his 29 years as an officer, and the many friends and neighbors he helped and served will grieve with them. He was a well-liked and honorable member of the community. For his family in blue, they will hold his memories dear, for many of them came into their uniforms while he was there to be a mentor to them, to help guide them through their careers. They will remember him for all that he had done for the blue family and hold the line from there.