In Memory of Chief of Police Marvin Wayne Trejo 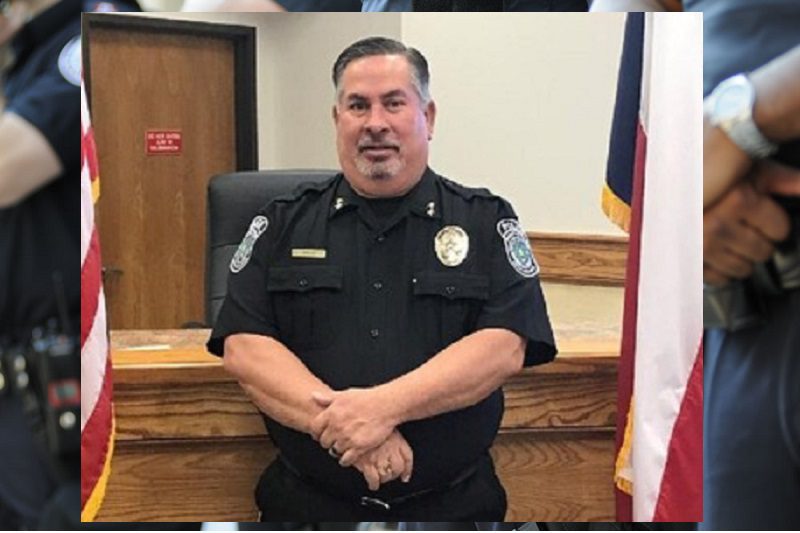 Chief of Police Succumbs to COVID-19

Chief of Police Marvin Trejo, 58, died Sunday, May 10, 2020, after contracting COVID-19 during an outbreak within the Dumas Police Department. Chief Trejo took the position in 2019 after former Chief of Police Jim Nelson retired. Chief Trejo had served in law enforcement for 30 years, 25 in Dumas alone, and was a U.S. Marine Corps veteran. He is survived by his wife, Lisa, and four children, Renee, David, Katera, and Kailey. His survivors also include his loving grandchildren, three sisters, Patsy, Brenda, and Marleen, one brother, George, aunts, uncles, many nieces and nephews, and numerous friends and colleagues.

On September 17, 1961, in Falfurrias, TX, George and Patricia Trejo welcomed their son, Marvin, into the world. Young Marvin grew up in Morton, TX, and became a high school graduate from Morton High School. Post-graduation, Marvin dutifully and honorably served his country as an infantryman in The United States Marine Corp. Later, Marvin attended the Police Academy at South Plains College. After graduation, Marvin served for five years at the Littlefield Police Department then moved to Dumas, where he served for 25 years, which included his last year as Chief. Marvin loved riding his side by side, was an excellent grill master, was a great leader, and was helpful to all, but above all, Marvin loved being around his family, especially his grandchildren. Marvin married Lisa Escamilla on February 2, 1998, in Sunray, TX, and was a Saints Peter and Paul Catholic Church member.

“Our thoughts and prayers go out to the family and friends of Chief Trejo,” the police department wrote. “Rest in peace, sir, we have the watch from here.”

A funeral procession left Morrison’s Funeral Home at 9:30 am. on Friday, May 15, and proceeded to the Memorial Garden Cemetery, Father Gabriel Garcia officiated. The Amarillo Police Department provided the Honor Guard. Those who participated in the procession and attended the graveside service were asked to remain in their vehicles at all times due to COVID-19 concerns. Before the procession began, only the family was taken to the police department to allow them a few moments together to pay their respects in private.

The Dumas Police Department provided instructions and a map of where parking for law enforcement, first responders, and civilians who wanted to be in the funeral procession would be located. As they made their way south down Dumas Avenue, hundreds of area law enforcement and fire department units, ambulances, and citizen vehicles joined the procession, which amassed roughly 3-5 miles long. Along the procession, area fire department units were staged on overpasses to salute Chief Trejo and his family as they passed by. Several fire departments flew flags on ladder trucks and from overpass bridges in honor of the late Dumas Chief of Police.

Reflections from the Community

The Dumas Police Department gave the community information regarding the procession for Chief Trejo on their social media page. “Chief Trejo will be laying in state Wednesday 5/13/20 from 12 to 8 pm, and Thursday 5/14/20 from 8 am to 7 pm. The funeral procession will leave Morrison’s Funeral home at 9:30 am on Friday, 5/15/20, and proceed to the Memorial Garden Cemetery on I-27 between Canyon and Amarillo. We ask that those participating in the procession and attending the graveside service remain in their vehicles at all times. Thank you for your support during this trying time and for your cooperation.”

The Moore County Journal expressed the loss of a local leader to the community and shared in the grief. “Moore County lost a local law enforcement leader today. Dumas Police Chief Marvin Trejo was escorted home by local law enforcement and first responders. He served the Dumas Police Department for many years. Chief Trejo was appointed Chief of Police in April of 2019.”

Jodi Tuscana, a fellow officer and coworker, wrote of her sadness over the loss of a friend and leader. She expressed her condolences to his family and the hard times of suffering such a significant loss. “I would like to send my condolences to the Trejo family. Chief Marvin Trejo was an amazing leader and one I look up to. Although I served under him for a short time, I learned plenty on how to be a leader and had much to still learn from him. Chief Trejo will always be remembered not only for the amazing leader he was but for his friendship as well. Continued prayers for his family in these hard times. -Officer Tuscana”