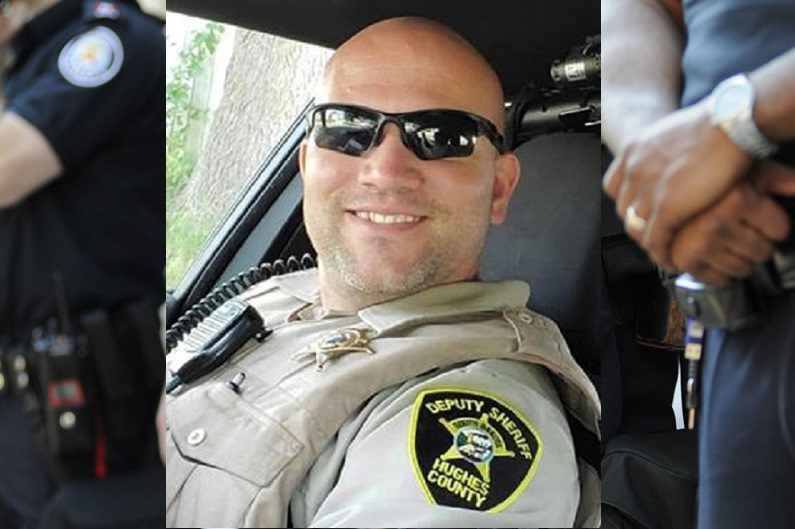 On Jul 3rd, Chief Deputy Lee Weber, 37, drowned in the Missouri River two miles north of Fort Pierre while attempting to rescue his 8-year-old son who had fallen out of a moving boat. Weber dove into the water without a life jacket trying to get his son, but a current swept him away. Thankfully his son was rescued by nearby boaters.

Eighteen local, state, and federal law enforcement agencies were involved in search and recovery efforts to find his body. After an exhaustive search, Chief Deputy Weber’s body was recovered on Jul 9th. His last action performed was nothing less than that of a hero.

A Man of Service

Chief Deputy Weber grew up in Black Hawk, SD, and Pierre, SD. He attended and graduated from T.F. Riggs High School in Pierre, SD. On Dec 27th, 2001, Lee joined the US Army. He graduated from basic training in Ft. Leonardwood, MO, on May 2nd, 2002. Lee served two tours, one to Iraq from 2004-2005, and then served in Afghanistan from 2009-2010 with the Army National Guard’s 153rd Engineer Battalion, finding and blowing up roadside explosives to protect allied troops. Deputy Weber was a decorated veteran of the South Dakota National Guard.

Deputy Weber joined the Hughes County Sheriff’s Office in 2015 and was promoted to chief deputy in 2019. He was on active duty Army National Guard and a member of the volunteer SWAT Team. Weber also served as deputy emergency manager for Hughes and Stanley counties in 2019. Deputy Weber enjoyed watching football, hunting, fishing, and family.

The tragic incident occurred downstream from the Oahe Dam at approximately 2:51 pm on Jul 3rd, the Capital Journal reported. Deputy Weber was boating with his eight-year-old son when the boy suddenly fell off of the moving boat.

The Stanley County Sheriff’s Office (SCSO) said in a news release. “Weber, who was not wearing a life jacket, immediately dove overboard to save his son but was swept away by the river’s current.”

Thankfully, Deputy Weber’s son was pulled to safety by a group of other boaters nearby, but the deputy hadn’t been seen since the incident. An immediate search was set in motion that included 18 local, state, and federal agencies utilizing boats, divers, drones, cadaver dogs, the SD Highway Patrol Airplane, and many volunteers.

The body of Chief Deputy Lee Weber was found Thursday afternoon, Jul 9th, near the railroad bridge across the Missouri River between Pierre and Fort Pierre, 4 miles from where he went missing upstream and six days after he jumped out of a boat trying to save his son.

According to the Stanley County Sheriff’s Office, Weber’s family was quickly notified and soon came to the recovery scene. Chief Deputy Weber was transported by law enforcement officers to a funeral vehicle waiting nearby. There was a procession of law enforcement vehicles that escorted Lee Weber’s body to the funeral home.

Hughes County Sheriff Darin Johnson said in the news release: “This is a very sad moment, but we also are very relieved that Lee’s body was found. It is important that the family and his friends have closure. Lee deserves this tribute.” “The Stanley County Sheriff’s Office thanks all of the agencies and volunteers who helped with the search,” according to a news release Thursday evening. “Funeral services are pending. We ask for prayers for the family and respect for the family’s privacy during this time.”

Reflections of Loss from Friends and Family

Friend and colleague, Hughes County Sheriff Darin Johnson, said in a news release, “This is a sad moment for his family and all of us who knew Lee.” “But we are not surprised that he would risk his life to help someone else, especially a family member. Lee protected others while serving in Iraq and Afghanistan, and he did here as well. We will remember him for his unselfishness and bravery.”

The Hughes County Sheriff’s Office stated, “Lee was a co-worker, friend, and mentor to all. He will be greatly missed by his law enforcement family and those whom he was sworn to serve. Our thoughts and prayers are with the family of Hughes County Sheriff’s Office Chief Deputy Lee Weber, both blood and blue. Thank you for your service. Rest easy, hero. We’ll hold the line from here.”

Elizabeth Wright from Minnesota shared her sorrow and condolences on the loss of a friend. “I wish I had the words. It’s so hard to believe we met back in elementary school? I remember how kind you were, even then towering over me. You gave me that mixed tape w Richard Marx, I’ll be right here waiting. It still reminds me of you to this day. Even when we didn’t see eye to eye, I never had a bad memory. It’s such a huge loss for so many, which just confirms the amazing man you were. Thank you for being you and holding the standards so high in my life as my rock to fall back on. RIP, Lee. You were so dearly loved. So blessed I had you for the time I did and proud to call you friend.”